There is no electricity in the office of the Nizhinsky Cannery located in Darnytskyi district, because of that, employees go to the sixth floor on foot. However, there is light in the offices and even a working coffee machine – the company, like many others in our country, took care of buying a generator.
This year, businesses in Ukraine had to adapt to new working conditions caused by the war — logistics chains were broken, it became more difficult to export products, and some suppliers were under occupation. What to do in such conditions?
Volodymyr Krokhmal, General Director of the Nizhynsky Cannery, spoke about work in the most difficult year in the history of Independent Ukraine and plans for the future. 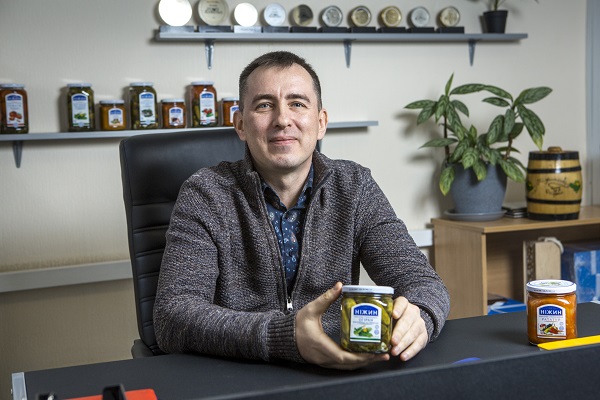 The Nizhynsky Cannery is one of the five largest producers of canned vegetables. What challenges did you face this year and how did you overcome it?
The Nizhynsky Cannery is not only a canning factory, it is a huge vegetable processing enterprise. Classic canning still remains our main line of work, however, we have many auxiliary industries, types of vegetable processing, which are growing dynamically. This gives us, as an enterprise, additional stability.

The war with Russia started for us before for the full-scale invasion and annexation the part of Donbas and Crimea. Back in 2013-2014, Russia banned the export of food products from Ukraine, and we quickly got rid of any ties with this market. From 2013 to 2014, every year, they became stronger — they overcame all possible challenges and formed many areas of stability. However, the full-scale invasion at the end of February was a huge stress for us.
Our enterprise is located in Nizhyn city, Chernihiv region. Literally in the first days after the war, the city was almost surrounded, all access roads were blocked. Fortunately, the city of Nizhin was not captured. And in a few days, we began to resume production, as we had stocks of products in warehouses. Then the question arose before us, how to deliver the products? But then the question arose before us, how to deliver the products? The main road leading to Kyiv was captured. We drove through villages, on broken country roads, and it was risky. However, since mid-March, we have resumed product deliveries to retail chains. In the first days of April, Kyiv, Chernihiv, and Sumy regions were de-occupied, and we were working almost at full capacity. They were able to arrange the supply of the necessary raw materials and materials.
Of course, there were many difficulties when working with suppliers: some did not work, some warehouses were closed, others were destroyed. Logistics chains were broken. Unfortunately, many partners have temporarily stopped their activities.

Bestsellers
Where does the company buy vegetables?
We have two large raw material zones. Zucchini, cucumbers and all necessary ingredients for canning — fresh dill, parsley, greens are grown 15 kilometers from Nizhyn. This is our enterprise, which conducts separate activities and grows raw materials, both for the Nizhynsky Cannery and for other buyers. Another of our enterprises grows tomatoes, peppers, eggplants, and onions in the Kakhov district of the Kherson region.

This territory is still occupied…
Yes. Unfortunately, the company is not working. It work has been blocked almost since the first days of the war. We hope for a quick de-occupation.

The plant manufactures products under the TM “Nizhyn” and “Greenville”. What products are popular and did the demand for them increase after the start of the war?
Over the last ten years, we have observed that the level of consumption of traditional pickles produced under the “Greenville” brand is constantly increasing. That is why I said that the Nizhynsky cannery is not a classic cannery. Previously, the demand for peeled vegetables was growing. Consumers considered fresh products useful, while canned sales either did not increase or even slightly decreased.
The war changed everything. Long-term storage products have become important for consumers, and the shelf life of our “Nizhyn” canning is three years. When Ukrainians stockpiled during the period of uncertainty, canned vegetable was included in the mandatory set of products, as well as cereals, stew and others. Products of lactic acid fermentation, with a shelf life of up to 30 days in the cold, began to lose. Such metamorphoses are observed.

Nizhynsky Cannery today
The production facilities of the cannery are located on the territory of 16.5 hectares. The cannery produces more than 100 products under the TM Nizhin and Greenville. Every year, the enterprise can process 12,000 tons of vegetables and produce 10 million jars of products.

Did you have to increase canning production?
The vegetable preservation season is short and takes three active months — from the end of July to October. During this period, we produced the maximum. Indeed, demand is currently at a high level.
However, I can guarantee consumers that our stocks will last at least until the summer of next year.
In addition, we are already working on production plans for 2023 and take into account this year’s change in the structure of demand.

Where cucumbers and tomatoes are grown
Part of the territory of Ukraine still remains occupied, some fields are mined. Do you understand where you will buy raw materials?
Yes. We will get cucumbers and zucchini from our raw material zone, which is located not far from the cannery. A more complicated story with vegetables that grow in the south are tomatoes, peppers and eggplants. We dream of the quick de-occupation of our native Kakhovka, and this is the most important and most pleasant plan for us. We hope that it will happen.
If this event will be slightly shifted in time, closer to the summer, then we have partners in the Zaporizhzhia, Dnipropetrovsk, Odesa regions – our suppliers, with whom we worked before. But even from the same Kherson region, from its right-bank part, products can be supplied. In our sunny Transcarpathia, there are climatic zones that allow growing the same range of vegetables as in the south. So we will make a decision at the end of March – beginning of April.

This year, the Nizhyn Cannery is 95 years old. Has the cooking recipe changed during this time? Have you had any new offers in the last year or two?
The recipes of our bestsellers – pickled cucumbers and squash paste – have not changed for 30-40 years. When we talked about the “Greenville” brand, we essentially restored recipes for traditional pickling of vegetables using lactic acid fermentation. We studied old books, records of technologists, which were actively implemented before the advent of sterilization and pasteurization processes.
If you pay attention, there is a small barrel on the shelf. We used to have a separate cooperage shop where we made such small and big barrels.

And in such barrels cabbage was stored?
Both cucumbers and cabbage. In the 30-50s of the last century, there was no other way to preserve products. Later, big tin containers appeared, and even later, sterilization and pasteurization procedures were introduced, and products were packaged in glass containers. When we talk about our pickles, they are not some new property. These are the classic recipes of our grandfathers and great-grandfathers.
This was the beginning of the history of the Nizhynsky factory. Because it was not written since 1927, but much earlier. From the time when there were production artels, then there were cooperatives that were engaged in growing and salting cucumbers.
In addition, we release new products almost every year. There are not many of these novelties, as we study each of the recipes in detail and meticulously. It should appeal to a large number of people who take part in tastings. That is why we work on each new product for more than one year. Among our new products are complex vegetable salads that have four, five or even six components.

Has any of the novelties already become a bestseller?
Yes. Looking at sales volume, it’s Ratatouille salad. It is so bright, colorful. An interesting and very tasty salad. Such products are popular abroad, where consumers do not have a large choice of such products.

Where are the products of the Nizhynsky Cannery supplied?
Are exports increasing?
Yes. Now we export our products to more than 25 countries of the world. Among them are almost all EU members, perhaps less active southern countries, where tastes differ slightly. We are actively represented in North America, primarily in the USA.
An interesting story with our permanent partner – an American distributor, to whom a large batch of Nizhin canning was to be shipped at the end of February – beginning of March. We even received an advance payment, but could not complete the order. Our partners asked to transfer these funds to the needs of the Armed Forces of Ukraine. And we did it.
The first aid, which was given to the Ukrainian military, was not our own funds, which we also provided later, but the prepayment of the American company for the products. By the way, we later fulfilled this order.

What do people like in the USA?
Many Ukrainians live in the USA, Israel, and some European countries. They know our brand, our products and are their connoisseurs. Recently, Americans and citizens of other countries have become actively interested in Ukrainian products. Russian products are forced out by Ukrainian ones. And even those who have never tasted our products wanted to try it. It will not be a secret that the markets of the Baltic countries have become more active. They occupy a specific weight in exports. And probably deliveries to these countries will be record in the current year.

What is the share of exports?
In the vegetable canning segment of the Nizhin brand, it is 40%. Once we started with indicators of 10-15%. Currently, export occupies a significant share in the sales structure of our company.

The Nizhynsky Cannery is developing dynamically. Do you plan to process vegetables for baby food?
Such an idea is shared by a whole group of people who work in our company.

Are you ready for such production?
This requires a separate workshop, equipment that must meet fairly strict requirements. While we think about it. It’s not a plan we plan to implement next year, but it’s definitely in our area of interest. We know how to produce high-quality vegetable baby food.
This project will require substantial investment and we need to seek financing. Soft loans would be appropriate. Now, unfortunately, our own opportunities to invest in huge projects are limited.

What are your plans for next year? And how will you adapt to the new reality?
The new reality is already with us. We hope that 2023 will be a year of positive changes. Like all citizens of Ukraine, we hope for a complete victory on our terms. And we are really looking forward to it. Could it be worse than what we’ve already experienced? Theoretically, yes. We are ready for new challenges. However, we hope that the following months will be more optimistic and better. And we will be able to grow and process raw materials.
This year, our company kept almost all the staff, everyone was provided with work, and there were no layoffs. And this is a great achievement for us. You can make up for everything, but it is very difficult to assemble a team, because this is the basis of our future growth. What is important for us in the next year? State support, perhaps, primarily in matters of financing. For development, for investments, for the creation of new jobs.

I want to congratulate everyone on the upcoming holidays and wish us all victory, family comfort and well-being.

Links to the materials of the NV:
https://biz.nv.ua/ukr/markets/pidsumki-roku-ta-prognozi-na-2023-vid-seo-nizhinskogo-konservnogo-zavodu-50294285.html